We never miss Beaufort, SC, that is pronounced Buuuuuu-Fort, not Bowwww-Fort, NC. These two towns are spelled the same but are pronounced as differently as the towns themselves are. Buuuuu-fort SC is a wonderful stop with a small downtown waterfront and a nice city marina. We usually anchor out here, but this time the weather was stormy with a cold wind, rain and thunderstorms, so we put Island Spirit on the dock.

We also had a call from former IP 45 Far Niente owners. Jeff and Marjorie who invited us over to their beeee-uuuuuu-teeee-ful home for a shrimp and pasta dinner that set the standard for any shrimp meal. What a wonderful treat this was to visit good friends, share some fine wine, tour a custom home, lounge around on sofas and chairs and tour the community via golf cart. Thank you Jeff and Marjorie for your hospitality and friendship, we really enjoyed our time at your home. We hope to see you at HCC this winter for some Tiki Hut Time.

While in Beaufort, SC we met more Island Packet owners who are from Texas and sail on an IP 420 named Pilgrim. Well, Dick and Becky also run around on a little 48 foot Symbol Power Yacht that happened to be docked two boats behind us. He stopped over and introduced himself and we caught up on all the fleet happenings in the Gulf Coast. Dick runs the IPY Gulf Coast Owners Group and they are very active as well. Our second night in Beaufort, SC we enjoyed dinner together at the local seafood restaurant called PLUMZ where we great conversations from teaching to engineering to hime schooling to patents to growing a business and family. We really enjoyed the evening together.


Topping off the whirlwind Beaufort SC stop we bumped into IP 31 DOGS LIFE run by Paul and his dock named LUCKY. These two are running their boat from Norfolk VA to Key West then up the west coast of Florida down the Tortugas and then up and into the Bahamas and then back to Norfolk VA. What a Dogs Life it is, ruff ruff :-)


Fog, did someone say FOG, YES, we had the thickest fog we have ever been in and that includes the four summers we have sailed in Maine. This pea soup fog was solid. We ran into this for about an hour on total instruments and radar, we even ran a small cut on total radar. Then we finally said that is enough and we dropped the anchor about 4 hours short of Beaufort, SC. The next day, we had to wait intil 10 am until the sun burned off the fog. We think fog is the most difficult situation to run the boat into. 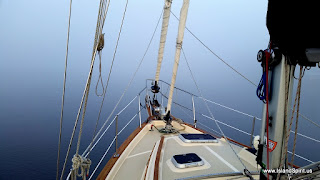 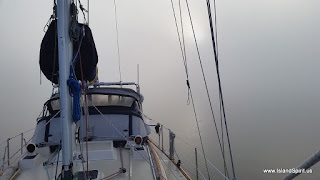 Receive our Posts via EMAIL

Read Our Blog Newest to Oldest